The Mad Turkey Farm provides a sanctuary for neglected and abused farm animals in Virginia. To date, we’ve provided homes to dozens of animals.

Some of our favorite, lovable fowls are Kaporos chickens.

Currently, we have several Cornish Cross chickens in our flock that were saved from Kaporos, a ritual slaughter practice conducted each year in New York City. During this brutal ritual, young chickens – just six weeks old – are subjected to unspeakable horrors.

We’re doing our part to save Kaporos chickens and bring awareness to this cruel, inhumane practice. Learn more about Kaporos, what it is, and what you can do to end Kaporos ritual slaughter.

Kaporos is a religious ritual, in which more than 60,000 chickens are slaughter in New York City each year. It’s performed by a small subset of the Hasidic Jewish community in New York.

Leading up to the ritual, six-week-old Cornish Cross chickens – which are bred for slaughter because they grow so quickly – are left in crates on the streets of New York. They don’t receive food or water, and are left to the elements in the fall. Many of these young chickens don’t even survive to the slaughter, as they succumb to the elements, cramped quarters and lack of food and water.

During the Kaporos ritual, chickens are picked up by their wings and swung in the air, while a prayer is recited. This swinging process alone can cause pain, broken wings and severed tendons. Ultimately, the fowl is slaughtered in accordance with halachic rules.

Why Is Kaporos performed? The ritual allows for practitioners to atone for their sins. The sins of the person are transferred to the fowl, and then the animal is donated to foodbanks to feed those in need.

Unfortunately, though, these animals aren’t always donated; many end up discarded in the trash. Some lucky animals are able to escape and many are saved by animal rights groups. Those that do survive are taken to farm animal sanctuaries like The Mad Turkey Farm.

Is There a More Humane Option?

Kaporos can be performed without chickens. In fact, a more humane method involves replacing the chickens with cash, which is then donated to the poor. The ritual is essential the same: A small cash donation, of about $20 is wrapped in a white cloth, and swung over a person’s head, while a prayer is recited. The cash is then donated to those in need.

It’s important to note that only a small portion of the Hasidic Jewish community in the U.S. practices Kaporos; it’s not widely practiced by Jewish people. In fact, many prominent Jewish scholars and religious leaders are opposed to the practice.

Providing a Sanctuary for Kaporos Chickens 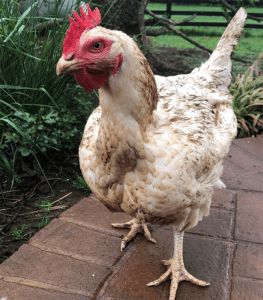 Heather, our Kaporos rescue, is enjoying playing in mud

Saving neglected and slaughter-bound animals is what we do at The Mad Turkey Farm. And chickens hold a soft spot in our hearts. We have a large bachelor flock of rescued roosters – some of which survived Kaporos. Like Kaporos chickens – which include both roosters and hens – roosters are often slaughtered in a process known as culling.

Additionally, we have a large flock of hens. We believe that all animals should be given a safe space to be animals and live out their lives free of abuse. We’ll continue to care for Kaporos survivors and continue to call for the end of this practice.

Interested in supporting our Kaporos chicken rescue efforts? Make a donation to The Mad Turkey Farm today and support our mission of saving neglected farm animals.